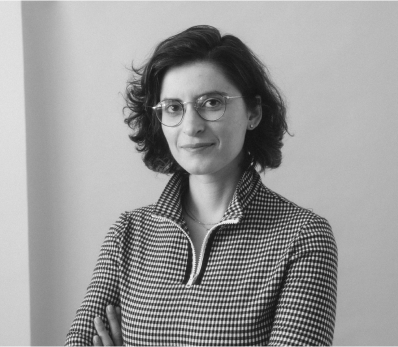 Anna Kats is an architectural historian, curator, and critic whose work historicizes the political economy of architectural production and technical transfer across the socialist sphere of influence in the 20th century. Kats holds a B.A. in Slavic Languages and Literatures and Architectural History from Columbia University. She is currently pursuing a Ph.D. in History of Architecture at the Institute of Fine Arts, New York University, where her research examines histories of industrialized construction and architectural labor across the Soviet Union, socialist Yugoslavia, and the post-colonial Lusophone world.

Previously, as a member of the curatorial team in the Department of Architecture and Design at the Museum of Modern Art, New York, Kats was an organizer of the 2018 exhibition Toward a Concrete Utopia: Architecture in Yugoslavia: 1948-1980, which featured previously unseen drawings from Svetlana Kana Radević’s personal archive. In 2019, she co-organized Skopje Resurgent: Art, Internationalism, and Solidarity at the Museum of Contemporary Art, Skopje. She is also co-curator of The City of Tomorrow, a research initiative and exhibition series supported by the Goethe-Institut that examines the historical development of Soviet architectural patrimony from the Russian Revolution through the end of the Soviet communist project. In this capacity, she has co-organized exhibitions at the New Tretyakov Gallery in Moscow, the Alexander Tamanyan Armenian National Architecture Museum, and the Palace of Arts in Minsk, Belarus.

Kats has served as Visiting Assistant Professor in both the graduate and undergraduate architecture programs at the Pratt Institute in New York, where she taught seminars on architectural criticism. She has been an invited lecturer and studio critic at the Columbia University Graduate School of Architecture, Planning, and Preservation, the Harvard Graduate School of Design, the University of Pennsylvania Weitzman School of Design, and the Pratt Institute.

A frequent contributor to monographs and periodicals, Anna has published essays and reviews in Artforum, The Architectural Review, LEAP, and Metropolis, where she is Contributing Editor.